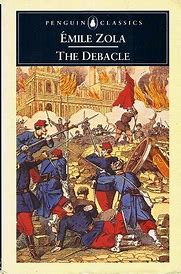 The Debacle is intended to be part of the Rougon-Macquart cycle, but it is really a historical novel - recent history which Zola himself witnessed and reported as a journalist.  That is both the problem and the book's appeal.

Jean Macquart is a peasant who has joined the army to better himself.  This plunges him, in 1870, into the disastrous Franco-Prussian war, which was short and brutal, which set the scene for the horrors of World War I, and which haunted French sensibilities for almost a century.  The French were beset with hopeless leaders, political and military.  Napoleon III was dying and wasn't even emperor in his own household.  Macmahon, marshal of France, suffered the indignity of being shot in the backside very early in the climactic battle of Sedan and was hors de combat for the rest of the day.  The Prussians had Bismarck and needed no more.  The army in the field surrendered, Napoleon abdicated, but Paris refused to give in.  The Prussians therefore laid siege over the winter.  Early in 1871 the Government of National Defence under Adolphe Thiers made peace and the Prussians withdrew.  Again Paris struck out on its own, forming the Commune, the first socialist, feminist, revolutionary autonomy.  Thiers, now President of the Second Republic, moved to Versailles and set about conquering his own capital.  The Commune only lasted from the middle of March to the end of May before going out - literally - in a blaze of glory.  They burned down official buildings, monuments and the imperial palace.  One of the city arsenals blew up.

It's an incredibly complex story which Zola divides into three: the build-up to battle, the battle, and the siege and commune.  He sets his tangled personal stories against this background but, being real events which the majority of his first readers (in 1892) had experienced, historical fact always has to dominate fictional fancy.  The result is inevitable - fiction loses every time.  Jean is wounded in the battle - he has to spend an unconscionable time recovering (and is then hospitalised for fever in Brussels) but is suddenly fit enough to enlist in time for the Versailles army to invade Paris because Zola needs to bring him face to face with his counterpart Maurice Levasseur, who has taken up the cause of the Commune.

Frankly, the characterisation is so sketchy that I didn't know the surnames were Macquart and Levasseur until I looked them up just now.  Jean is simple and honest, Maurice is educated and unpredictable, his sister is an angel, their uncle a goblin.  And yet, as always with Zola, there are fictional moments of astonishing power: for example, what the saboteurs hiding in the woods do to the spy 'Goliath', and particularly the unspoken interaction between Goliath and the girl he fathered a child with.

I can't pretend I loved The Debacle - Zola is not a lovable writer.  But I was impressed, startled and always intrigued.  I bought the ebook because I was researching the Paris Commune for one of my own projects and was frustrated by the lack of impartial witnesses.  Zola certainly filled that hole and I can confirm that nothing here is contradicted by historical scholars.  On the contrary, there is something the scholars can never tell us - what it was like to be there.