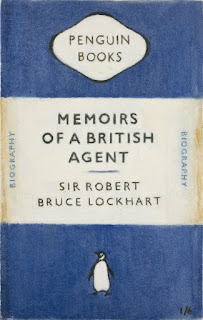 The title night suggest a secret agent, but that would have been impossible in 1933 when Lockhart published.  The title is strictly accurate.  Lockhart was the agent of the British government to Moscow in 1917 and 1918 when the British did not recognise the revolutionary regime but desperately needed them not to side with Germany in what turned out to be the second half of World War I.  Lockhart was at the time just thirty years old.  He had been with the British Consulate in Moscow before the war (the capital was St Petersburg, hence that is where the Embassy was) but had suffered a nervous breakdown early in the war and had returned to Britain.  He, however, had the social skills, the contacts and the gift for languages needed as the only British representative in critical times.  More importantly, he had a genuine love of Russia and the Russian people.  He was friends with Kerensky and arranged his escape when the Bolsheviks took over.  He then met with Trotsky on a daily basis and was greatly impressed with Lenin.  It was Lenin, on his sickbed as he recovered from the assassination attempt by Dora Kaplan, who freed Lockhart from the Kremlin where he was held prisoner during the Terror.  Whilst in prison Lockhart encountered the mysterious head of the Cheka Jacob Peters, who may have been Peter the Painter, leader of the anarchists in Sidney Street, London, during the infamous siege.  Peters gave Lockhart a present on his (Peter's) birthday in 1918 - his (Lockhart's) mistress, Moura, who herself became an infamous femme fatale.  Also of dubious allegiance was Sydney Reilly, supposedly an Englishman but actually came from Odessa.  Lockhart tells us everything he knew about Reilly - the 'Ace of Spies' - but that is almost nothing.  Nobody knew everything about Reilly.  Lockhart concludes that Reilly almost certainly set him up by concocting and releasing to the Russian Press the so-called 'Lockhart plot'.  Why Reilly might have done so remains a mystery.

There is no other English witness to these events which shaped the world we still live in.  This should be a set book for advanced level history.  Lockhart is scrupulously honest.  He was a married man when he consorted with Moura but he tells us about it nonetheless.  I have never read elsewhere about the assassination of German officials in Russia who were trying to win over the Russians to their cause.  I would have liked to learn more about the British military 'mission' sent to Archangel, but Lockhart was half a continent away in Moscow and only knew anything at second hand.