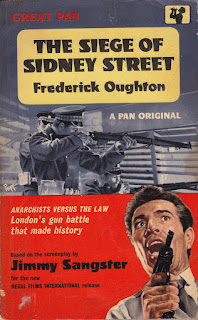 Ah, the forgotten art of the film tie-in, or novelisation. OK, you still get novel versions of film and TV franchises, but surely the days sare over when a British B picture warranted the commissioning of a Pan Original, no less, to add to the pleasure of those who enjoyed the movie. Yet here is one such, by the prolific Frederick Oughton, from an original script by Jimmy Sangster, whose How-to-Write-A-Movie book I reviewed last week, and the once famous London novelist, Alexander Baron, who I suspect is also reviewed on this blog.

Odd, though, that people should want a novel when the siege was a real event, only 50 years old at the time so well within living memory, and already the subject of many non-fiction books. The story is an absolute cracker - armed police and infantrymen exchanging gunfire with a small band of anarchists, already wanted for murder, holed up in a derelict tenement. Crowds came to watch as, famously, did the Home Secretary, Winston Churchill. Indeed, Churchill's presence is likely one of the reasons that not absolutely everyone today knows about the Siege; certain elements would prefer we forget Churchill's penchant for shooting militants - and miners. Oughton - and I presume Sangster - hold back Churchill's arrival to the very last chapter, so naturally it is not an issue. The story is extremely well done, opening up the complex background through character interaction. The dialogue is effective and I noted that Oughton was very good at establishing location.

I haven't seen the film - I have no idea why the chap on the front, presumably Kieron Moore, is wearing a light-grey suit at least a decade out of period - but I absolutely devoured the book.
Posted by rogerwood at 15:36