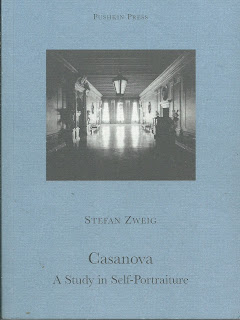 Originally published with essays on Stendhal and Tolstoy, this long paper on Casanova, from 1928, was part of an envisioned series of such volumes. These three were all auto-biographers or, as Zweig puts it, Adepts in Self-Portraiture. The 'Casanova' was always seen as different because he was not a professional writer; his Life (1798) is his only serious written work. It is also, of course, far and away the best known of the autobiographies considered, in constant demand since it was first found and printed. Zweig therefore sets out to determine what makes it so compulsive. His thesis is, essentially, that Casanova lived the first half of his life in the moment, without planning or reflection. He thus builds up such a mass of experience that, in retirement, it takes him sixteen volumes just to get down the events.

I am not familiar with Zweig's work but I enjoyed this and will certainly read more.
Posted by rogerwood at 16:38