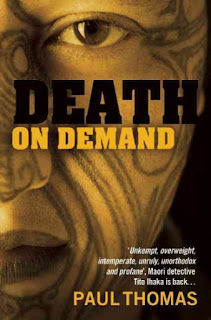 Detective Sergeant Tito Ihaka has been rusticated to the New Zealand countryside after the Auckland elite complained about his obsessive pursuit of one of their number for allegedly hiring a hitman to kill his wife. Now, he is suddenly recalled. The suspect has something to say - but will only say it to Detective Ihaka.

The revelation unearths a whole wriggling mess of potentially linked cases - from the suicide of a rich dentist's wife to a prisoner beaten to a pulp in supposedly secure custody. It's all too much for Auckland to handle. Ihaka is on the spot so, despite longstanding animosity, he is roped in to help.

I don't know if there have been other Maori cops in New Zealand crime fiction, but Ihaka is a great conception by British-born writer Thomas. He is old school, rough and rugged, but the twist is he has got his act together in exile. He has lost weight, cut down on the drink, got himself fit.

The plot is tangled, with perhaps a twist or two many, and because of that the set-up chapter takes too long. Once it gets going, however, it moves along like a steam train. All the characters are deftly drawn, Thomas has a masterly command of dialogue, and there is the perfect amount of backstory to give Ihaka his edge. There is apparently another available as an ebook (Fallout). So that's a must for me.
Posted by rogerwood at 15:08