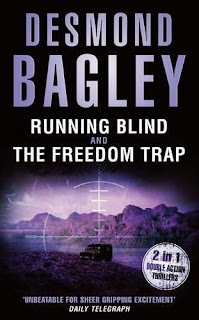 I had, of course, heard of Desmond Bagley. He was a big noise in the Sixties and Seventies. I had not realised that he died comparatively young (59) in 1983. I had never read any of his books. Then I was pointed in the direction of this linked double-bill (the 'Slade' novels) in ebook for only £1.99.

It was certainly money well spent. Written in 1970, Running Blind hasn't dated at all, presumably thanks to Bagley's habit of keeping things simple on the surface and deep beneath. Alan Stewart, the hero, comes to us with considerable back story, so much so that I was startled to realise there were no earlier instalments.

Stewart owns a Scottish glen but was brought up in Sweden. He is a retired British spy, having fallen fall of his department head, Slade. He spends a lot of time in Iceland, has an Icelandic home, an Icelandic girlfriend, and speaks the language. Hence he is asked by Slade to deliver a small package to a contact there. Stewart interprets this as a peace offering, a potential route back into espionage, and agrees.

Once in Iceland, he is ambushed. Everyone seems to know he is there, and carrying something important. He is chased across the volcanic landscape and soon realises the man in pursuit is the former KGB agent Kennikin. For Kennikin the chase is personal; in Stewart's last mission he accidently emasculated the Russian. Surely, in all the circumstances, Kennikin is also on the inactive list. So who has sent him to Iceland?

I was fascinated to learn that Running Blind was Bagley's first spy thriller. You'd never guess.
Posted by rogerwood at 16:17