The Meaning of Treason - Rebecca West 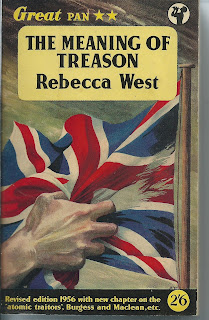 The Meaning of Treason was originally an account of the trial of William Joyce ('Lord Haw-Haw') in 1945. West sat through the entirety of his trial and appeals. Joyce's defence was a good one: you cannot betray a country you have never been a citizen of. And he had never been British. He was born in America to an Irish father; before he made any broadcasts he had been granted German citizenship. His downfall was, he had accepted a British passport to make his escape to Germany on the eve of World War II. You could argue, of course, that the British should have been more careful who they granted passports to, but it should be remembered that in September 1939 the Irish State was more of a potential danger to the UK than Germany was. In any event, Joyce hadn't committed treason in the sense of betraying secrets to the enemy, because he had never been important enough to have any. He had, without doubt, given comfort to the enemies of Britain by, for example, mocking Churchill and laughing at British defeats. But then how come Norman Baillie Stewart, who had served a sentence for betraying secrets before the war and who was the original Lord Haw-Haw only received a short custodial sentence when he was tried after Joyce had been hanged?

These were the questions West asked in her 1949 book. To the best of my recollection, she came down on the side of common sense. Joyce's trial was a kangaroo court and he wasn't guilty of treason. There were loads of offences he could have been tried for - obtaining a passport he wasn't entitled to was an obvious starting point - and no one would have batted an eyelid had he ended up serving a double-figure sentence of imprisonment.

By 1956 (this edition) West had mellowed. All the anchors of her original argument are still present but so are reams of waffle which she believes entitle her to have changed her mind. They don't. The real problem though is that in 1951 she agreed to add in an account of the atom spy Klaus Fuchs, and by extension his traitorous boss Alan Nunn May. They were undoubtedly guilty; neither man was executed, and both claimed a moral defence - that A-bomb technology was redundant so long as all major countries had access to it. For this further edition in 1956 she added Burgess and Maclean to the mix - paid, long-term Soviet spies whose only excuse was they were lifelong shits. As such, they of course did a runner to Moscow before they could be tried. Furthermore, as we all now know, they were only the tip of a considerable iceberg.

If you want to know about Joyce's trial, read the 1949 Meaning of Treason. Instead of trying to add in the next wave of traitors under what was inevitably a very broad brush, West would have been far better off writing separate volumes using the same technique.
Posted by rogerwood at 15:44