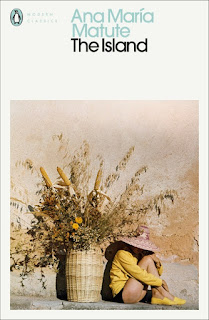 The Island (1959) is a roman a clef novella set on the island of Mallorca during the Spanish Civil War. Teenage Matia is marooned there with her cousin Borja in the home of their domineering grandmother. Matia is there because she has been expelled from her convent school; her mother is dead, her scapegrace father out of the picture, so she has nowhere else to go. Borja's father is a general in the republican army and has lodged his wife and son in her mother's safekeeping. Also in the household is the servant Antonia and her slightly odd son, "Chinky" Lauro who is acting as temporary tutor for the younger children.

The island is new and alien to Matia, who is used to cosmopolitan Madrid. On the island families are still living off the reputations of long-dead ancestors. In the old village is a long abandoned square surrounded by the decaying houses of the Jews who burned to death there half a millennium earlier. The islanders don't know how to respond to outsiders or even those of their own who have been to other places. Up on the hill lives the seldom seen Jorge of Son Major, a sea-farer who some say sailed as far as the Greek Islands. In his seclusion he has become a fantasy for the island women, all of whom hint at having been his lover. Similarly, their sons proudly claim to be Jorge's secret son.

The Island is made out by some critics to be a lost Eden or 'enchanted' in the manner of Prospero's island. The first is certainly lazy tosh; there is nothing paradisiacal about this place. The sun 'wounds', the vegetation cloys. You could make a better case for The Tempest theme, with Jorge as Prospero, Lauro as Caliban, Borja as Ariel and the grandmother as Sycorax, but Matute herself seems to refer to it as Never Never Land. In short, it is a memory of a place seen in childhood which becomes overpowering as childhood edges into maturity.

It is a pure rites of passage piece, beautifully done. Only one thing annoyed me. As mentioned above, Matute is big on light and scents. The light is characterised, coloured, explained and justified. But scents remain just smells. Why? On the other hand, I really enjoyed Matute's use of parentheses for asides and sudden insights. Other readers, apparently, don't.
Posted by rogerwood at 15:17