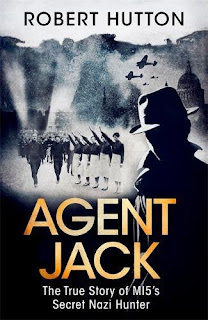 I’m always fascinated by what British fascists got up to during the war. Mostly, of course, they did what everybody else did and either fought or supported the fighters. It’s that exceptional few that fascinate. Agent Jack is the story of Eric Roberts, the ultimate Mr Ordinary, who worked for MI5 before, during and after the war, initially as a fascist himself, spying on communists, then as agent provocateur, gathering together those who wished to help Hitler conquer Britain.


That’s the problem – he was an agent provocateur. Despite Hutton’s best efforts, there’s no way round the fact that the people Roberts recruited would almost certainly have got up to no real mischief had he not brought them together. Dutton’s problem is, they didn’t do any harm and were just a bunch of repellent but otherwise ordinary nutters. There’s no denying Roberts’ courage and care; equally we can’t pretend he prevented any outrages against the national interest.
His is a story worth telling, but only as a part of other stories. For example, MI5 were reluctant to push Roberts’ recruits too far because of the fiasco surrounding the failed attempt to intern the well-connected and very foolish Ben Greene. Greene had been set up by an agent provocateur and was promptly released. He did no harm whatever thereafter. The real damage was to Max Knight, who worked with Roberts for the wonderfully named British Fascisti and then brought him to MI5.


The best thing about the book for me was the vivid portrait of Victor Rothschild, whose role had never before been clear to me. It is now, and I owe that entirely to Robert Hutton and this book.
Posted by rogerwood at 15:24