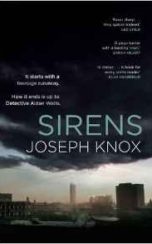 At last – Manc noir! Deep black crime set in good old Manchester. When all is said and done, whyever not? Manchester has been derelict, the great British industrial wasteland, for over fifty years to my knowledge. When I taught there in 1980-1 the kids were battling racist cops led by a fascist religious maniac in the streets of Moss Side. They broke into the cop shop and stole the Special Branch murder kit the Met had hidden there.


Wait a minute … I’m talking myself into this, aren’t I?


To an extent, Joseph Knox has beaten me to it. Only to an extent. I don’t think he’s old enough to remember the good old days when every copper with aspirations was hopelessly corrupt, certainly in my Northern experience of the time. It is of course a matter of fact with the Met. Pretty much permanently. But I believe the war on the miners and the Hillsborough disaster were what separated proper cops from the scum. Cops are much better now.


But not according to Knox in Sirens. His cop, Aidan Waits, is suspended for corruption (stealing drugs from the station) and trying to save his career by doing a deep undercover job for his Superintendent. His investigation is complicated when a local MP enlists him to find his seventeen year-old daughter. Both jobs mean getting inside the Franchise, the main drug operation of the moment. This Waits does easily. He finds the girl – but then she is murdered. If Waits can’t find who did it, he’s going to get fitted up. Suddenly all the good guys are out to kill him while all the bad guys and gals want to help. In the manner of top quality noir, things become very grey. He sorts it, of course, because he was always intended to be a series lead. The solution is complicated but satisfactory – perhaps one linkage too many.


The main problem, though – and it is by no means a fatal problem – is that neither Knox nor his editor know when to end. It’s a series, guys – we can catch up with folks next time round. Far better, in a noir, to leave a few threads loose.
Posted by rogerwood at 14:47