Thomas Altman was a pen-name of Campbell Armstrong Black (1944-2013), who wrote loads of bestselling thrillers and who is now largely forgotten. He wrote specifically so that he didn't have to endure a 'proper' job but is a much better writer than the motivation might suggest. He was, as his real name suggests, a Glasgow boy from Govan. You would never in a million years guess it from The True Bride (1982), which is entirely set in Arizona. 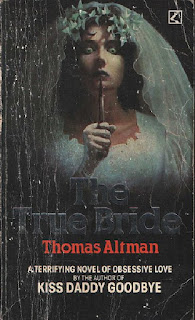 Ellen is heavily pregnant. She has only recently moved to Arizona for her husband's work, and yet her wealthy mother lives fairly close by. Ellen's mother is wealthy but Ellen lives in some sort of ghastly apartment compound. She has only one friend, Vicky, who is the realtor who sold Ellen and Eric the accommodation. Ellen is fat, unhappy, lonely, scared, as you might expect of a first-time mother. But things turn decidedly weird. Someone steals her best blue blouse and shreds it. Someone takes library books from her car. Someone, presumably the same someone, decapitates a vintage doll and sticks the body in a hole slashed in Ellen's mattress. A woman rings, ostensibly from Eric's workplace, to say he's been taken ill. She dashes into town - only to find the office deserted. In Eric's desk she finds a prescription for lithium.

Here, in short, we have a psychological thriller. True gaslighting in the Patrick Hamilton tradition (the biography of whom arrived, coincidentally, in the mail this morning). Is Ellen losing it or someone really stalking her? Is Eric up to no good? Does someone intend harm to her baby?

Altman displays a tremendous capacity for plotting and structure and keeps us guessing to the end. For me, the revelations along the way seemed perfectly placed. I'd suddenly figure something out and then, instantly, Altman confirmed it in the text. In fact, of course, he'd led me by the nose to an inevitable conclusion. From the prologue onwards - a brilliant hook, by the way - we are taken inside the villain's mind. Again, this is beautifully done. We think it might be Ellen but, if it isn't, there is nothing to give the game away other than 'this person is clearly unhinged'.

The only defect - and I suspect this might be why Altman isn't on everyone's reading list - is that he sacrifices character to plot. His characterisation is not hopeless - you can tell everyone apart and they all have suitable speech patterns so you know who's speaking without needing flags - but there just isn't enough of it. Ellen's mother, for example, is characterised more by her walking frame than by whatever caused her to need it. Eric is a do-gooder, Vicky a home-wrecker, the girl in the apartment complex a complete airhead. The problem is particularly acute with Ellen herself. She is having such a bad pregnancy that half the audience is going to skip those parts. The odd good day, the occasional daydream about the future, would have made all of us care that bit more.

Ellen and Eric's last name, incidentally, is Campbell. Get it?
Posted by rogerwood at 16:21