Joe Country is the sixth in Herron's Jackson Lamb series, the exploits of the 'slow horses' MI5 has dumped at Slough House. It's not as deep as some of the others but on the other hand the black humour is much funnier. It continues the series without advancing the storylines very far. 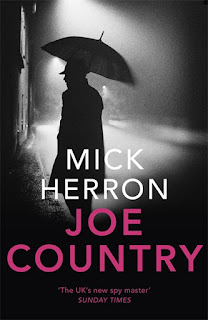 Lamb is touchy after the way things ended in London Rules - i.e. with a bloodbath in Slough House itself. One thing everyone agrees about Lamb: he looks after his joes. Joes died in London Rules, Lamb's joes, and Lamb is not happy. He is not especially thrilled with his latest recruit, an analyst suspended from the Park after paedophile porn was found on his work laptop. Even Lamb draws the line somewhere. Meanwhile Louisa Guy is approached by the widow of her late partner Min Harper (a joe who died in an earlier novel), whose teenage son has gone missing in darkest Pembrokeshire.

Thus begins the drift of Lamb's entire team into Joe Country as the snows fall. River Cartwright is stalking his renegade father who showed up unexpectedly at the funeral of the legendary Old Bastard. J K Coe is uncharacteristically switched on; Emma Flyte, former head dog at the Park, creates a new partnership with Louisa, and Roddy Ho lends his digital expertise and - unwisely - his car. Back in London, recovering alcoholic Catherine Standish fills her flat with wine bottles, someone carves PAEDO on the new recruit's face, and Di Taverner, now at last First Desk at the Park, learns more than she wants to know about the recent behaviour of a leading royal.

It's all the usual bloodshed and laughter, if a little light on story, and it takes us to the brink of finding out about Lady Di's plan for the slow horses. Which I look forward to.
Posted by rogerwood at 17:20