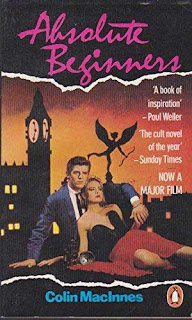 I remember the movie coming out - and dying the death as one of the great turkeys of our time. It was so bad, I waited more than 30 years before tackling the original book. It is by no means a bad book but I can see why the movie stank. You don't want to give Julien Temple material that is already glib and superficial.

It is the summer of 1958 and London sizzles in a heatwave. The first generation of British teenagers are coming into their own and our hero (unnamed) is at the heart of the action. He is a street photographer and fan of contemporary jazz. He is entangled with the lovely Crepe Suzette but she gets engaged to her homosexual boss. Our hero professes to be modern but actually his story is as old as time. His mission is to win back Suzette and to defend the vulnerable - in his case, the put-upon black people like his mate Cool who are under threat from racists. Along the way he encounters pop stars, advertising gurus, debutantes, gay people and Teddy Boys.

MacInnes has a buoyant, bounce-along style which convincingly captures the patois without descending into code. His characters have silly names but are nonetheless three dimensional and attractive. He even succeeds with the deeply uncool like the hero's dying father and his randy mother and achieves real depth with the latter.

For me, though, it is the background of the first Notting Hill riots that gives the novel an immediacy and weight that the film so woefully lacked. Absolute Beginners is not really about youth culture, it's about the birth of multiculturism. As such, it deserves a better reputation than the movie left it with.
Posted by rogerwood at 16:24