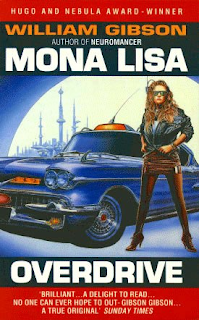 This is the third of the original cyberspace novels. It supposes, I suspect, a certain level of familiarity with what went before. I don’t have it, but I nevertheless really enjoyed the book. I like everything by Gibson. I must have read half-a-dozen and haven’t found one yet that falls significantly below standard.


Mona Lisa Overdrive is about the stars of cyberspace, which we of course have had for the last ten to fifteen years. In reality that Gibson didn’t suspect, reality stars don’t become vastly wealthy (Kardashians excepted), they just slip away. The crossover into ‘real’ life isn’t as seamless as many expected. However, our main female protagonist, Mona, is a teenage prostitute who gets sold and chemically adjusted because she looks so much like the big cyber star, Angie Mitchell, has just completed rehab but is somewhat tarnished, so the big idea of those gangsters who control such things, is to stage her kidnap and then seemingly recover the much more malleable Mona to take her place.


Meanwhile the world goes to rack and ruin on a tsunami of drugs. The Yakuza in Japan have a major office in London to which the head Yakuza sends his dozy daughter Kumiko with a virtual friend for company. There are machinations. Hardcore devotees of cyberspace are doggedly working on the questions of what it looks like. Some extremists are hard-wired in. A bunch of these cluster at Dog Solitude, where Slick builds killer monster robots and there’s an apocalyptic battle.


It’s all great fun, beautifully written, prescient, thought-provoking. Gibson is a genius.
Posted by rogerwood at 15:44