The Bull from the Sea - Mary Renault 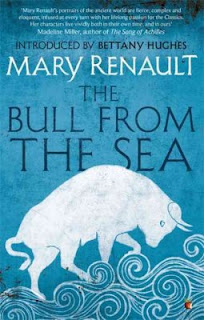 This is the second of Renault's Theseus novels, originally published in 1962. I picked it up because I have a general interest in modern novels about ancient Greece - and was blown away from the first page.

The Bull from the Sea is a stupendous piece of literature, a modern masterpiece. The Attic world is put in front of us in pitch-perfect detail. Renault keeps close to the legend whilst adding psychological subtleties which would have been irrelevant to the early Bronze Age. For those who lived within 500 years of Theseus and Hippolyta the gods juggled human fate as they pleased. This will not do for the modern reader. We want motive, reasoning, and Renault provides.

Her masterstroke is to make Theseus the narrator. That way, we have to know what he is thinking or, when he is in reflective mode, what he now makes of his earlier actions. The Bull from the Sea covers his career from his return from Crete to Athens, his expanding empire, and ultimately his death, forty or so years later. Renault covered his youth in The King Must Die, apparently, and that is now top of my must-read list. Here, meanwhile, we follow his abduction and seduction of the Amazon queen Hippolyta, the birth of their son Hippolytos, and Hippolyta's death in battle against the women she formerly led. Meanwhile Theseus keeps his pledge to the vanquished Cretans and marries Phaedra, daughter of Minos, who bears him another son, Akamas. Ultimately the two boys meet and become friends. Phaedra, though, cannot bear the thought of Hippolytos, who has all the attributes Akamas lacks, becoming Theseus's sole heir. Having learnt her treachery from her father's mistress Medea, she arranges the young man's death.

It is a loss from which Theseus cannot recover. He ends up a recluse on the island of Skyros, where he realises the time has come for him to commit suicide, like so many of his forebears, by falling off the cliffs. Just before he goes he hears about a young warrior who is desperately keen to meet him. This, brilliantly, is Achilles. Thus we know where the spirit of Theseus goes, even if what remains of his empire passes to the uninspiring but loyal Akamas. This sort of cyclical storytelling, essential to the likes of Homer and Sophocles, works equally well for Renault. There were parts I didn't like as much as others - one of them, ironically, was the handling of Oedipus in Kolonos, which I felt was too Sophoclean; the other the Kentaurs, which I would could have lived without altogether. What struck me most, though, was the Bull from the Sea itself. Renault handles this beautifully. Early on in the book the Cretans bring the a prize bull from the Labyrinth in an effort to speed up Theseus's marriage to Phaedra; which means we aren't expecting it all when another bull, possibly descended from the first and brought to where it is by the sea, turns up in Hippolytos's moment of crisis.

Superb. I cannot recommend The Bull from the Sea highly enough.
Posted by rogerwood at 09:35