The Sins of the Fathers - Lawrence Block

Having recently read and reviewed Block novels from the early days and his most recent, here we have mid-period Block, when he was starting to make a serious name for himself. Not to put too fine a point on it, The Sins of the Fathers dates from 1976 and is the first of his Matt Scudder series. 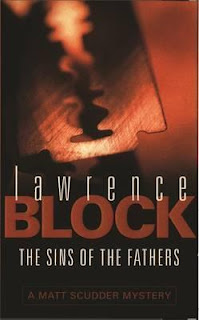 Scudder is an ex-cop, now open to filling his time with the odd private inquiry. Scudder doesn't charge for his time or expenses, but is willing to accept gifts which he then pays tithes on to a local church. Not that he is a believer or anything, it just squares things with his conscience. Scudder is divorced but on friendly terms with his ex. He has girlfriends and probably drinks a little too much. He lives in a cheap New York hotel and spends a lot of times in bars. He hires a car if he needs one, otherwise he walks and uses public transport.

Anyway, a contact puts him on to Cale Hanniford, a businessman from upstate NY, whose daughter has recently been brutally murdered. The case drew publicity for all the wrong reasons. There is no doubt who killed her - her 20 year-old roommate Richie Vanderpoel is found in the street, drenched in Wendy's blood, telling all and sundry that he's killed her. That night, in the police cells, he hangs himself.

What Hanniford wants from Scudder is an insight into his daughter's life since she dropped out of college and took to prostitution with older men. Scudder accepts. He soon finds out that Wendy was actually Hanniford's stepdaughter. She was born out of wedlock, her real father killed in WW2. Scudder tracks down her previous roommate, who also knew her in college. She confirms the prostitution and also tells Scudder why Wendy dropped out of college. There was a scandal involving one of the professors.

Scudder can't help looking into the killer, too. Richie, it turns out, is the son of a fire-and-brimstone preacher. As a child, Richie found his mother exsanguinated in the bathroom. He is homosexual but has no real interest in sex, certainly he is not interested in an ongoing relationship with other men. Scudder determines that Richie and Wendy, the closeted gay guy and the prostitute, actually established a loving sexless relationship. Why then did Richie kill her? That's the twist - and it's a zinger.

Block's style is phenomenal, so easy you don't really notice. Yet his characters leap off the page, the dialogue zips along, and there is no shortage of description or depth. Here, for example, we get a thorough insight into the New York gay scene in the mid-Seventies and the coming of age of the free love generation. Recommended.
Posted by rogerwood at 15:57