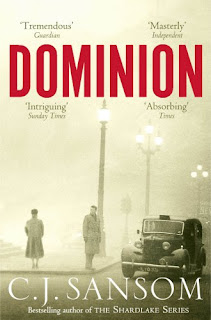 Sansom is obviously best known for his historical crime series featuring Tudor lawyer Matthew Shardlake. There are, however, two standalone novels, Winter in Madrid and Dominion (2012) which are both well worth reading.


Dominion is set in 1952 (the year Sansom was born) in an alternate Britain. Here, the appeasers in government surrendered to the Nazis in 1940. A decade on, Britain has been allowed to retain its empire whilst itself becoming part of the pan-European German empire. The Nazi war machine is still fighting Russia in the east. Churchill and Attlee have been forced underground. The ghastly Lord Beaverbrook sits in 10 Downing Street with Mosley as Home Secretary and Enoch Powell as Minister for India. Hitler is no longer seen in public. Everyone knows he is ill; those in a sufficiently elevated position know he will die soon and fear that the SS and the Army will turn on one another to succeed him.


David Fitzgerald is a civil servant at the Colonial Office. He is recruited to the Resistance after his young son is killed in a domestic accident. Rather than try and heal the rift with his heartbroken wife, David would rather risk everything by secretly raiding the files at his workplace. To get at the files he flirts with one of the clerks, whom he knows is besotted with him.


Frank Muncaster was David's roommate at university, a secretive, solitary weakling with a hideous rictus grin. He was horrendously bullied at school and even his own brother loathes him. Returning to Britain for their mother's funeral, Edgar Muncaster cannot resist bragging about his top secret work in the States. Frank is so horrified that he pushes Edgar out of the window and winds up in a mental hospital. Finally Frank is so afraid of electric shock therapy that he reaches out to the only friend he ever had, David Fitzgerald.


By this point, Edgar has confessed to his employers. America might be neutral regarding Europe and its wars but Adlai Stevenson has just been elected President and there is a school of thought that he might reach out to the British resistance. There are spies everywhere, many of them double agents. The news of what Frank Muncaster knows is everywhere. The Americans obviously want him, but so do the Germans and, most of all, the British Resistance.


David's cell is charged with rescuing Frank and getting him out of the UK. The story has four main protagonists and we switch viewpoints between them. There is David's story, his wife Sarah (who finds herself involved in a truly horrifying incident in Tottenham Court Road), Frank, and Gunther Hoth of the Gestapo, who is determined to end a distinguished career by tracking them all down.


Hoth reminds me of one of the many brilliant ideas in Dominion. Hoth is based in the German Embassy in London, which is Senate House, commandeered from the University of London and draped with enormous Swastika flags. What an image that is! Equally striking is the smog which blankets key stages of the rescue operation. Another reason for setting the novel in 1952, the Great Smog only lasted four days in early December yet it changed British attitudes to burning coal forever.


Dominion is a long book but the pace never flags. The story strands are swept neatly together in a set piece finale on Brighton Beach. Sansom adds a substantial historical note at the end, which is the place to do it. It is there for those who want to read it, not something you feel obliged to wade through before starting the story. Personally I didn't read it but I did skim it and could not help noticing Sansom's unexpected views on Scottish Nationalism.
Posted by rogerwood at 16:31