Childhood's End dates from 1954 and was therefore written not long after Prelude to Space; yet it is a million miles away in terms of literary craft and scientific ideas. 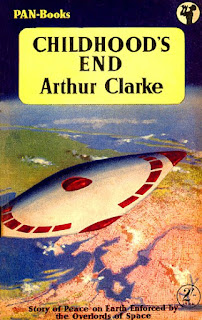 In my review of Prelude (see below) I suggested that it barely qualifies as a novel, lacking all the normal constructs of the form (character development, tension, etc.). It was, in fact, a framing device for explaining Clarke's ideas about early space travel. In Childhood's End the ideas are much more radical - how does Earth deal with the sudden arrival of aliens, specifically 'good' aliens as opposed to, say, the Martians of H G Wells? The structure is also much more novelistic, albeit there is no real protagonist and only an antagonist if you regard the aliens as collectively a single character, not an unreasonable proposition given what happens to the titular children.


The narrative is in three parts. The first, in Clarke's favoured end time of the 1970s, is a few years after the sudden appearance of gigantic alien ships over the major cities of earth. Their leader, Karellen, is over New York where he interacts only with the Secretary General of the United Nations. The aliens refer to themselves as the Overlords, Karellen is the Supervisor. They say they have come to save Earth from its own atom bombs. They enforce peace across the globe and promote the notion of one world. Other than that, they do not interfere. From the moment they arrived, everyone has wondered what the Overlords look like. Even Secretary General Stormgren, who has regular meetings with Karellen aboard his spaceship, has never actually seen his host, who is hidden behind a screen.


The second section is set 50 years later, when the Overlords finally decide that the people of Earth are ready to see them. I did not for a moment guess what they look like, and I won't reveal it here. For me, it was a masterstroke, the best moment in the book. We then meet other people who are involved with the Overlords one way or another. We meet the Greggsons, George and Jean. We meet Jan Rodricks, who stows away on one of the Overlords' transports when it returns to the home planet. The journey there and back will seem to him like four months; in Earth time it is eighty years.


The third section is ten years after the second. The Greggsons have two young children, nine-year-old Jeff and the infant Jennifer. They are now living in a sort of dropout community, two Pacific islands, New Athens and New Sparta. Perhaps Clarke had heard of the American Nature Boys certainly he seems to be predicting the hippy reaction to world of hi tech science. Finally it become apparent why the Overlords came to Earth and what their long term (very nearly a century) aim was. It involves the children. And when Jan Rodricks finally returns after eighty years, he finds that he is the last true human being.


All this in less than two hundred pages is an astonishing achievement. With Clarke you of course get all the technical context and the predictions. My favourite of the latter is on the subject of TV:


Do you realise that every day something like five hundred hours of radio and TV pour out over the various channels? f you went without sleep and did nothing else, you could follow less than a twentieth of the entertainment that's available at the turn of a switch! No wonder that people are becoming passive sponges - absorbing but never creating. Did you know that the average viewing tome per person is now three hours a day? Soon people won't be living their own lives any more. It will be a full-time job keeping up with the various family serials on TV!


Clarke underestimated the number of channels and overestimated the quality of the programmes. But in essence he's spot on.
Posted by rogerwood at 17:31