Lost Light (2003) sits bang in the middle of the "Harry" Hieronymus Bosch series. Harry has walked out of LAPD after twenty-odd years and registered as a private investigator. His first case, however, is one he has carried away with him. 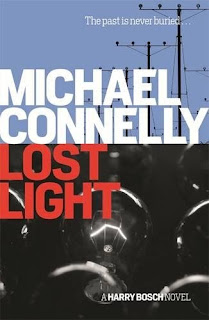 Back in the late Nineties Harry was assigned to a movie unit using $2 million in real money for a particular shot. The shoot was raided, obviously by someone with inside knowledge. Harry shot one of the raiders but never found the body. Later, Harry found the body of a woman from the production unit who also logged the money at the bank. Later still, two cops investigating the robbery were shot in a bar. One died, the other wishes he had; he's been left in a wheelchair, totally paralysed. He is another element of Harry's motivation for putting things right.


No sooner has he opened the old file than pressure is on him to leave well alone. His former partner, Kiz, now with the chief's office, warns him off. The FBI warn him, too. Turns out one of their own has disappeared, presumed dead, whilst working the case. The same agent, it appears, contacted Dorsey, the cop killed in the bar, just before she disappeared and he died. Something about one of the stolen bills turning up where it shouldn't.


Already, in just a couple of paras, we have a story so deep and tangled that for me it was reminiscent of Connolly's early and best work. Back in the Nineties, I bought each of his books as it came out in paperback. I gave up before the Bosch series really got going because I thought Connolly had become marooned in his formula. Clearly 9/11 was a shot in the arm for him. Writing about the immediate aftermath of the Twin Towers and the dark shadows of the War on Terror give us some of the very best sections of a very good book.


The denouement is as tangled as the premise. I will say no more than that - except, perhaps, to mention a revelation about Harry's personal life that I never saw coming. First rate reading by a master of his craft. Highly recommended.
Posted by rogerwood at 16:12