Nye (1939-2016) was one of those poets who, like Ted Hughes and Peter Redgrove, fed their imagination with the deep dark mythos of the British Isles, often as channelled through Robert Graves's concept of the White Goddess. 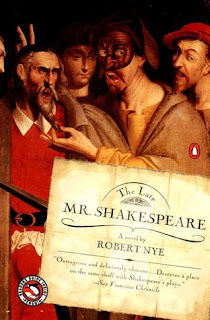 Like Hughes, Nye was also fascinated with Shakespeare. Hughes crammed all his Shakespearean considerations into the vast and dense Shakespeare and the Goddess of Complete Being. Nye found what I suspect was a much more lucrative outlet in rumbustious fiction. His career-changing hit was Falstaff (1976); he also wrote Mrs Shakespeare and, late on in his career this, which we can consider to be his final word on the subject.

The novel purports to be a life of the poet compiled, fifty years after Shakespeare's death, by the octogenarian Pickleherring (real name Robert Reynolds), the bastard son of a bishop and a bawd, discovered as a boy in Oxford by the great man himself and enlisted to play the female roles in his greatest plays.

Some seventy years later, Pickleherring subsists in the attic of Pompey Bum's whorehouse on the South Bank of London, sucking pickled mulberries and spying through his peephole on the girl in the room below. He clings to life purely in order to finish his life of Shakespeare, the researches for which he keeps in a hundred boxes. His life is, as it always has been, inseparably bound up with his subject, so we ricochet around the decades with little seeming order. Pickleherring has lived long enough to know all the barmy theories that have sprung up since Shakespeare's death. He has visited Stratford many times and been on terms, of a sort, with the great man's widow and daughters, though he did rather disgrace himself at the bard's funeral, when he dressed up in Ann Hathaway's clothes and became intolerably aroused.

They are all here, discussed in detail. Mr W H, the rival poet, the various Dark Ladies. Nye flaunts his scholarly researches through Pickleherring's scandalmongering pen. And great fun they are - Lucy Negro, 'Rizley'. The description of Christopher Marlowe and his wretched murder is profoundly moving. John Florio, the source of so many Shakespearean plots, springs from the shadows of centuries and the notion that John Shakespeare was his son's inspiration for Falstaff is resoundingly made. What the fat butcher may or may not have got up to nine months before Will's birth scarcely bears thinking about - nor indeed what Mary Arden might have done to the boy in infancy.

By having in effect two settings - the Elizabethan Golden Age and the early years of the Restoration when the censorious hand of puritanism still weights heavily - allows a play of stark contrasts: licentious pleasure versus bluestocking constraint. Nye makes the absolute most of both. His romps are Rabelaisian, the darkness of the 1660s sometimes very bleak indeed (for example, what are we to make of the actions and fate of Pickleherring's late wife, Jane?).

The Late Mr Shakespeare is a book of enormous richness. I loved it because I am a scholar of such matters. Four degrees in drama - you can't avoid Shakespeare no matter how hard you try. Importantly, though, I loved it because of its style, the characters, the brilliant way he establishes the famous gentleness of Will whilst at the same time revealing nothing of what really goes on in his head, because Nye is clearly of the opinion that genius is unfathomable.

Essential reading and great entertainment. Nye is now very much on my reading list.
Posted by rogerwood at 15:29