One Step Behind - Henning Mankell 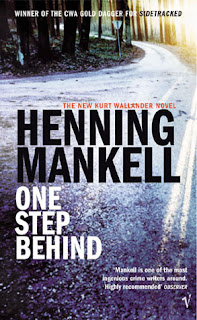 Considering his eminence and key role - second only, perhaps, to Stieg Larsson -  in the popularisation of Nordic crime thrillers, Mankell is oddly under-published in Britain. Consider, for example, the dreary cover and offensive bodytext typeface in this edition from Vintage. Those issues notwithstanding, One Step Behind is a reminder of just how great Mankell's Wallander novels are and how much he contributed to the genre.

The highly fallible lead detective - Wallander himself doesn't think he's fit to lead the investigation; the dense character backstories; the empathetic psychology of the killer, no matter how evil his or her actions... All of these Mankell  either brought to the table or developed from the great pioneers Sjowall and Wahloo, co-creators of the peerless Martin Beck.

Here, it seems, we have two mysteries - who killed and then resurrected a bunch of young party people, and the murder of Ystad detective Svedberg. It will come as no surprise that the cases turn out to be linked, but the perpetrator is very unusual if not unique. I certainly have never come across a fictional serial killer with this particular quirk - and I would have noticed, given that it is one I have thought about using in my own writing. It's a measure of how skilful Mankell's writing is that I didn't guess the twist until the second or third heavy hint.

A masterpiece of its type. Henning Mankell and Kurt Wallander at their mutual best.