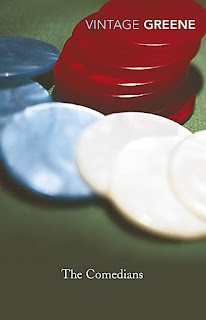 To be honest, the relevance of the title was lost of me. I get the general idea that Brown, Smith and Jones are to an extent the classical Greek masks, and the irony that they find themselves adrift in the dark tragedy of Papa Doc's Haiti, but other than that... It doesn't matter, though; what signifies is their 'civilised' Western-ness contrasted with the wild exoticism of the Caribbean voodoo and the complete otherness of the Tontons Macoute.


This is the first time I have tried Greene at his peak. I have read the earlier stuff - Stamboul Train and Brighton Rock - and I have read the late rubbish (Monsignor Quixote), but nothing from the fifties and sixties when the Nobel Prize seemed to await. Now, having read The Comedians, I agree with those who thought he should have the ultimate Literary Prize. Brown the Monaco-born adventurer, Jones the con-man and Smith the vegetarian former candidate for the US presidency, may be generic in their names, but in their souls they are all heroes in their fashion. Smith, with his redoubtable wife, is the epitome of honour and decency; Brown would like to be a villain but cannot prevent himself from standing up for the oppressed; and Jones, who really is a villain, ends up dying a freedom fighter's death.


The supporting characters are equally fascinating. We have Brown's lover, Martha, dissatisfied wife of a South American ambassador and mother of the appalling Angel; the monosyllabic mortician Rodriguez and the pathetic Baxter with his comic monologue about his wartime escapades as an air raid warden; Captain Concasseur of the Tontons; the quiet communist Dr Magiot; and perhaps the most omnipresent, Dr Philipot, the ex-Minister who we first encounter as a corpse in the empty pool of Brown's hotel but whose death and the consequences thereof drive everything that follows.


Papa Doc does not appear - already, in 1966, he was an invisible presence confined to the presidential palace. Had he appeared, I believe the novel would have suffered. The point is that the rule of fear relies on him not being seen. That way, nobody knows what he thinks or wants. No plans can be made. All plots to unseat him are doomed to fail for the simple reason that they have to propose something whereas Papa Doc is embodiment of nothing. That, if you like, is the comedy in which our comedians play their parts, a grim farce or the blackest of satires.
Posted by rogerwood at 14:49