As noted below, I acted on the spur of the moment and bought a copy of Colonel Sun, the first of the continuing adventures of James Bond which began after the death of Ian Fleming. They left a decent pause - Fleming died in 1964 and Colonel Sun did not come out until 1968 - but only because Fleming left a load of scraps that could be exploited in the interim. 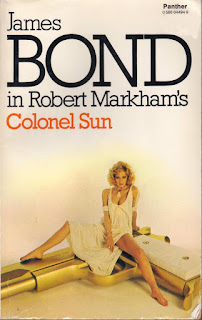 Amis had already cashed in with The Bond Dossier (1965) so was an obvious choice for Fleming's heirs. Whether Fleming himself would have approved is another matter. Amis was a truly gifted writer who dabbled in genre fiction from time to time. Fleming was a rubbish writer who created a genre phenomenon. What made the difference was that Fleming knew about the spying business and had met most of the real life spies he brought together in the character of Bond. You wouldn't turn to Fleming if you wanted an inspiring description of a landscape - certainly not if you wanted characters of more than (at best) one-a-half dimensions. But you can and always could rely on his explanation of a particular firearm or car. You can rely him for the tone in which spies and especially their superiors speak and their world view. Fleming was one during the war - a spy and a bureaucrat.


True Bond fans have always shunned the post-Fleming stuff. I have said before on this blog: I read all the early Bonds before I was twelve and loved them; I saw the films as they came out and drew a very firm line after Thunderball, which is crud; I tried the books again sometime this century and have read several, which I find to be a deal less good than they are supposed to be. The plots are rubbish, the characterisation inadequate, and the tone - which, in fairness, was undoubtedly the tone of posh folk in Fleming's formative years - offensive and unacceptable.


And so to Colonel Sun... First off, I have always found Amis's arrogance unacceptable, which oddly makes it perfectly acceptable here. In fact the sex bomb, Ariadne, is a fully developed, conflicted and unpredictable character, which surprised me. I really liked the eponymous villain. The torture scene was stripped down to gruesome basics and was genuinely horrifying. The plot was certainly complicated - much more complicated than anything Fleming came up with - and I'm not sure it worked. Colonel Sun is the super-villain but instead of seeking to rule the world like your regular super-villain, all he wants to do is disrupt a gathering of Soviet spooks on a nearby island and blame it on the gallant Brits, for which purpose he has arranged to kidnap M. (I thought the use of a decrepit and semi-senile M was pure genius.)


The writing is very good, infinitely better than Fleming. Amis handles the action sequences well enough and his descriptions of the Greek islands are often spellbinding. The problem - the failure, really - is his inability to convince us that he knows how to sail a common-or-garden boat. There have to be boats because these are the Greek islands. They have to be sailed cleverly and surreptitiously because this is a spy adventure. But - for goodness sake, Amis - Bond is a bloody naval officer!!! Presumably that's in your Bond Dossier somewhere. Even I knew that. And I also know that Fleming knew how to sail boats - because he, like Bond, was a Naval Commander.