The Bottle Factory Outing came out in 1974, towards the end of Bainbridge's early period. It has the hallmarks of being firmly working class, girls dreaming way beyond their station, a touch of the fantastical and more than a touch of the macabre. I have read some of her middle period novels, which are male-centric and historical and which I enjoyed. This is my first of the early period. 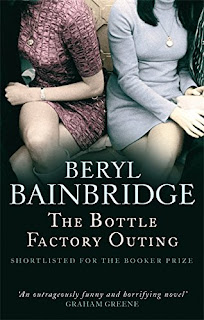 Freda and Brenda share a desperately glum bedsit somewhere on the outskirts of London and work together at the Italian wine-bottling factory nearby. Freda is big and blowsy and glam. Brenda is tiny and shy and odd, not unlike the way Bainbridge chose to present herself at the time. The bottle factory is a relic from the Victorian era. All the other members of staff are Italian, save for Patrick, who drives the van.


Freda has set her cap at Vittorio, who will one day inherit the factory. Brenda, meanwhile, has to fend off the attentions - and hands - of the office manager, Rossi.


Freda has decided there must be a factory outing to Windsor, which is where things start to go wrong, ending with a truly macabre problem. Meanwhile Brenda's mother-in-law turns up with a gun, Patrick fixes the toilet cistern, and Freda gets to ride one of the Queen's special funeral horses.


It's a comic novel, though not for me a laugh-out-loud one. The offbeat characters and meandering plot keep us involved and amused. You can sense Bainbridge's talent seething in search of the perfect vehicle. This isn't that vehicle, but it's great fun.
Posted by rogerwood at 17:25