Under the Skin - Michael Faber 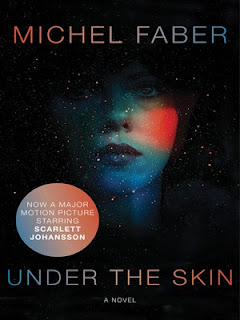 Under the Skin was Faber's first novel, published in 2000, when it won the Saltire First Book of the Year Award.

I would suggest that we have here is a fable about factory farming.  Human beings are selected, cut from the herd, force-fed in underground pens and ultimately processed as food for the elite of another, extraterrestrial civilisation.  But those who do the processing are merely the social rejects of that civilisation and, in the case of just two - the pioneer Essin and our protagonist Isserley - they have themselves been mutilated beyond belief, to resemble an earthly man and woman.

Essin, who does not trouble us much, manages the remote Highland farm which provides cover for the subterranean processing plant.  Isserley drives up and down the road network preying on hitchhikers.  Her orders are specific: they must be decent specimens, unlikely to be missed, and always male.

Faber's masterstroke, which elevates the book from simple sci-fi, is making Isserley female.  She is not a woman, although she looks more or less like one thanks to mammoth surgery, but she is female, the only female in the expeditionary force.  She is thus apart from her own kind.  But she was always apart.  When she was younger, on her native planet, she was considered beautiful.  Elite males promised her the world but always let her down.  In the end, her only escape from the Estates - the bottom rung of her underground society, was the experimental surgery which turned her into what she considers a freak and left her in constant pain.  Isserley knows she can never go home because then she would definitely be a freak.  She can pass a 'vodsel' (earthly human) but she can never be one - her surgery is not that convincing, as a would-be rapist discovers.  Then she learns that her unsought, unique status on the farm might be under threat.

I read the ebook and don't know quite how long the print version is.  I would say, however, that the text is just long enough.  Faber's prose style is perfectly judged and his descriptions of the Highland are both fresh and beautiful.  A millennium must-read.
Posted by rogerwood at 14:47