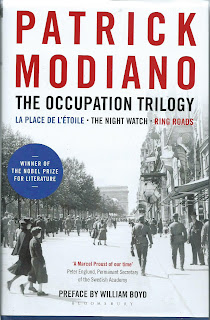 Patrick Modiano won the 2014 Nobel Prize for Literature.  La Place de L'Etoile is the first novel in his Occupation Trilogy and was also his first novel, published in 1968, when Modiano was only 23.

Though nothing of what happens is specifically in 1968 it is very much a book of 1968.  I can't imagine how readers who don't remember the excitement of '68, when the whole of Western Europe seemed to teeter on the brink of revolution, can come to terms with Place de l'Etoile.  Our hero is Raphael Schlemilovitch, or so he says; his persona is readily changeable.  What doesn't change is his Jewishsness, although he is not practising and is not in any way persecuted.  Instead, in his main persona, he is an incredibly rich young man of Venezuelan origins but born and brought up in Paris. He fancies himself a writer of belle-lettres and amateur philosophy.  His main preoccupation, though, is the Nazi occupation of France, which he is not old enough to remember but re-lives, working backwards from university to college to school and immersing himself - not with the Jews who suffered - but in those who hated them, especially the antisemitic artists who collaborated.

First and foremost amongst these is the novelist Celine.  Celine himself does not appear yet he is everywhere.  His characters become Modiano's characters.  The very first passage of the book is a pastiche of Celine's unique style - short, staccato, semi-sentences and exclamations.

The plot radiates from the central pivot of Raphael and his obsession.  Time is relative.  Every passage is a self-contained prose poem. People appear and disappear only to pop up again years later, or earlier, in another city entirely.  Even the narrative person changes when Raphael falls in lust the Marquise and her passion for sexual role-play.  Yet it all makes sense in a surreal way.  I was enthralled.

It's a very short book, just over 100 pages, but you have to take your time reading it or you will miss some of the nuances.  Just to sum up, I'm pretty sure the Place de L'Etoile has nothing to do with any of it.
Posted by rogerwood at 15:51