The House on the Borderland - William Hope Hodgson

Mr Hodgson is perhaps second only to Algernon Blackwood in his serious treatment of unreality.  Few can equal him in adumbrating the nearness of nameless forces and monstrous besieging entities through casual hints and insignificant details, or in conveying feelings of the spectral and the abnormal in connexion with regions or buildings

Thus said H P Lovecraft in his rolling survey of the form, "Supernatural Horror in Literature", written between 1925 and 1934. 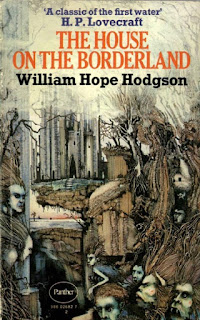 Well the object here is very much the building, and what happens there is abnormal to the ultimate degree.  Those who know Hodgson only for the Carnacki stories or his innumerable tales of the Sargasso, are missing out.  Borderland prefigures his final novel, The Night Land, which even Lovecraft and Clark Ashton Smith felt 'went a bit too far'.  It might have been written in 1907 (see 'the editor's' introduction) but in many ways it could easily have come from the acid-ridden 1960s.

It starts traditionally enough.  Two Victorian chaps take a holiday in the far West of Ireland.  There they stumble upon the ruined, abandoned house, perched precariously on an unstable rock platform over a huge bottomless abyss.  In the rubble inside the house they find a damaged manuscript written by the last owner, a nameless recluse.  We do not know when the manuscript was written or when the house was abandoned, and very soon the issue of time becomes irrelevant.

The recluse describes how he was sitting in his study late one night when he felt himself being borne up and away by invisible forces, into space and out of the solar system.  In another part of the galaxy he visits a planet where he finds a massive replica of his house hewn out of green stone, standing on the border of the Silence.  He wakes back in his study and finds that nothing has changed.  Or has it?

Part of his garden is carried away in a landslip.  The pit begins to form.  Creatures emerge and attack the house, which the recluse now realises stands on the border between dimensions.

A good third of the book is taken up with a second out-of-body experience in which he seems to live forever, so long that he sees and survives the death of the sun itself.  He seems to wake, but---

Unique for its day and very much a precursor of modern visionary sci fi, this book essentially defines the term 'fantastic fiction'.  A must-read for any student of the genre.

And what, for the record, did Lovecraft think of The House on the Borderland?  Why, this---

The House on the Borderland (1908) - perhaps the greatest of all Mr Hodgson's works - tells of a lonely and evilly regarded house in Ireland which forms the focus for hideous other-world forces and sustains a siege by blasphemous hybrid anomalies from a hidden abyss below.  The wanderings of the narrator's spirit through limitless light-years of cosmic space and kalpas of eternity, and its witnessing of the solar system's final destruction, constitute something almost unique in standard literature.  And everywhere there is manifest the author's power to suggest vague, ambushed horrors in natural scenery.  But for a few touches of commonplace sentimentality this book would be a classic of the first water.

I'd quibble with the last sentence - Lovecraft, understandably, had no knowledge of Hodgson's love life, which I see mirrored in the recluse's reunion with his lost love in the second vision - but otherwise, I think he pretty much covers all the bases.  And I'd forgive him almost anything in return for the word kalpas, albeit Lovecraft borrows it from Hodgson's book.