The Other Log of Phileas Fogg - Philip Jose Farmer 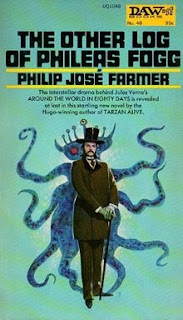 The title says it all: there is another log, other than the one Jules Verne edited for publication, containing the real, intergalactic context of Fogg's round-the-world journey.  It is crossover literature to a certain extent, in that Verne was of course for many people the father of science fiction, but Around the World in Eighty Days was not one of his science fiction works.  Twenty Thousand Leagues Under the Sea was, however, pure sci fi, and Farmer imports Nemo here as his criminal mastermind.

Farmer was the pioneer of this form, which is one I love and try to write myself.  He began with Tarzan, then Fogg, and on to create an entire world - the world of Wold Newton, in which all the heroes of fantastical pulp fiction coexist.  The Other Log, as I say, was his second experiment in the form.  Farmer completes the illusion with  editorial digressions.  The result is great fun, though I would say that, as so often with Big Idea Fiction, the characterisation suffers somewhat.  Finally, I must put on record how much I adore the artwork on this original 1973 Daw paperback.
Posted by rogerwood at 15:21