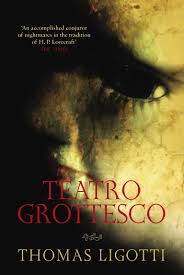 Thomas Ligotti has become a cult writer since the millennium.  People liken him to Lovecraft, Poe, and M R James.  I like all those authors so naturally I was keen to try Ligotti.  My conclusion?  He's not like the aforementioned.  He's not scary, though he does successfully get under your skin, and for all the very obvious work that goes into crafting his stories, he ends up being a bit dull.  For me, the problem is that his first-person narrator has always the same characteristics - reclusive, obsessive, an outsider with a bad stomach - no matter whether he is a creative artist or a drudge in a slave-labour town.  The towns, likewise, are always in the north, on the border, and he has usually left by the time he comes to write down his experience.  There are other regular tropes - other recluses, bizarre modern artworks, and carnival performers (carnies are much scarier in America, apparently, than they are in the UK).  Frankly, some of the long pieces are distinctly over-wrought - by the time I've got to the end of some of his paragraphs I've forgotten what he began with.  I admire the work, the commitment to form.  I own Ligotti has created a fictional world almost as real as Lovecraft's Arkham.  But he's not adventurous enough for my taste.
Posted by rogerwood at 16:22