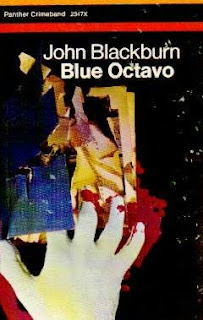 Blue Octavo is a bibliographic whodunnit.  Book dealer Roach pays way over the odds for a copy of an obscure limited edition book on British mountaineering only to be found dead that evening, ostensibly by suicide.  He leaves his home and entire stock to a younger colleague, John Cain, who is more engrossed by the riddle of the book than the dubious suicide.  The course of his inquiries leads him, and us, to a familiar face from Dead Man Running.  Yes, it's J Moldon Mott, explorer and author.  Mott immediately plunges himself into the mystery with comic results.  As before, he falls slightly short in the end - but there's an interesting and amusing twist at the very end, which obviously I'm not going to reveal here.

Blue Octavo dates from 1963 by which time Blackburn was an established, confident author.  What's interesting is that he was also a second-hand book dealer, and so is able to go into much more detail about the trade than anyone else who has employed a similar mcguffin.  In fact it's much more involving than the main murder plot.  I guessed who was responsible the moment he appeared, though I kept going in the hope I was wrong.

I remember Blue Octavo being quite a seller in its day.  I have to say it hasn't worn as well as other Blackburn books.
Posted by rogerwood at 14:57