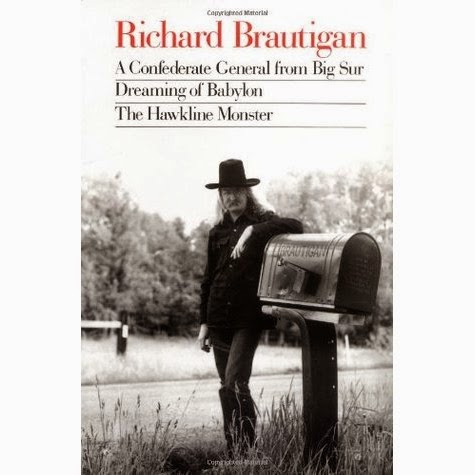 Dreaming of Babylon, subtitled "A Private Eye Novel, 1942", is Brautigan's skewed take on a hard-boiled private eye thriller.  C Card (no first name given) wanted to be a cop but failed the exam.  He is now a completely failed gumshoe, in hock to family and friends, reduced to bumping into blind beggars and purloining some of the spilled coins for himself.  Now, inexplicably, he is offered a paying job by a glamorous femme fatale who puts away beer like there's no tomorrow without ever needing to go to the lavatory.

Card's problem is that he spends his life dreaming of Babylon.  OK, it's not an entirely accurate dream of the historical empire - sometimes he's a band leader on Babylonian radio - but it's a rich source of escapism for a private dick down on his luck.  Even now his luck seems to be changing, his first resort is always to slip into a Babylonian daydream.  This naturally gets in the way of his efforts to borrow a gun with bullets in it.  And even when he's hired, why is everyone else trying to steal the same corpse.