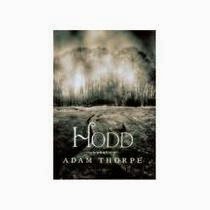 I first discovered Adam Thorpe when I picked up Ulverton from the carousel at my local library.  The structure intrigued me but, as explained in my review on this blog, it didn't satisfy me.  The key device was stretched too far.

Hodd, though, was written twenty years later (2010) and Thorpe is able to subordinate his clever literary devices to a complex yet cohesive narrative.  It works well - extremely well.

Essentially what we have is the translation of a medieval monastic manuscript about Robin Hood.  Our translator, the supplier of footnotes and marginalia, is a real character deeply mentally scarred by his experiences in World War One.  We come to know him through his textual comments but he never dominates.  The book is about the text, which turns out to be the proto-text for all Robin Hood legends.  I don't think I am giving anything away by saying that our medieval monk turns out to be the creator of the first and best-known Hood ballad.  The monk is compelling; he is turned ninety and knew Hood personally as a boy, a century ago.  Who is he?  In real life we never find out, but it is a major revelation (which I obviously won't spoil here) when we find out how he fits into the Hood mythology.

Perhaps the best thing about the book is that it remains the monk's story, not Hood's.  The boy had an interesting and unusual life before encountering the outlaw and it is that part of his life which draws him back to his roots for the dark finale, his last experience of the non-monastic world.

Let's be clear, Thorpe began as a fascinating and important writer with Ulverton.  I don't know (and must find out) when he made the breakthrough into a fully-fledged great modern novelist, but he certainly is one in Hodd.  My highest recommendation.  A must-read.
Posted by rogerwood at 13:21