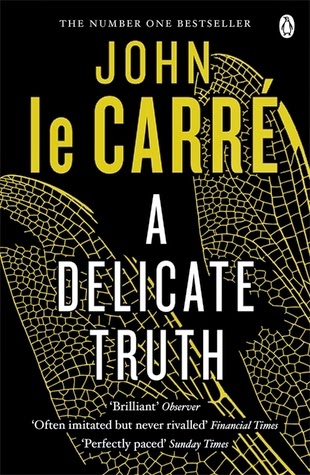 John le Carre gets better with age.  A Delicate Truth was published in 2013 when he was 82.  It is his 23rd novel and for my money one of his best.  What keeps him going, I suspect, is disgust with the state,  It used to be the conflicting states of East and West but now it is the controlling, deceitful and above all secretive state of Britain (and, to an extent, our American owners) that gets his goat.  And boy, is le Carre's goat well and truly got.

Three years before the novel's 'present' - that is to say, back in the dying dog days of New Labour - a long serving Foreign Office civil servant is persuaded to go and observe a clandestine op in Gibraltar.  The mission is definitely off the books; even the SAS are acting as a pro tem mercenaries.  'Paul', as he is then known, is acting as the Minister's red telephone.  Officially it's a success.  The dubious international target is captured and taken off to one of America's secret interrogation centres.  But, this being le Carre, that's all spin.  In fact the op was a disaster.  Still, spin covers all that.  The minister leaves parliament for a cushy job in the private sector, the government changes and nobody is any the wiser.

The key point, though, is that the government might have changed but the way it operates hasn't.  The book is full of wonderful vituperation from le Carre, himself of course a former insider, about the spreading web of secrecy, the ever-increasing number of bankers, arms dealers, international arms merchants etc who are granted special access to the corridors of power.  In an ideal world the intelligence services serve the nation, not the government of the day, and the civil service acts as a buffer between ministers and the corrupting world of private finance.  Neither of these things are true in contemporary Whitehall and le Carre has a boundless well of insidious double dealing at his disposal.

A great novel from one of Britain's best.  A classic of the genre.
Posted by rogerwood at 13:10