The Chemistry of Tears - Peter Carey 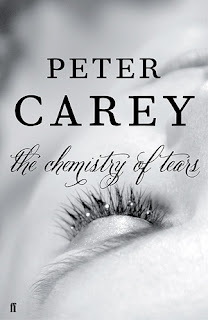 What a brilliant artist Peter Carey is.  Not only can he do different voices and literary styles (compare Parrot and Olivier, Jack Maggs and History of the Kelly Gang) but his structure, the framework on which his story hangs, can be dazzling.  Here, the structure is as cunningly wrought as the automaton which brings together Henry in the 1850s and Catherine in 2010.

Henry has convinced himself that the only way he can save his consumptive young son is to commission him a clockwork duck of the utmost ingenuity.  To do so, he has to travel to Germany, home of the cuckoo clock.  He describes his experiences there in a series of journals.  The journals are read 160 years later by Catherine, a horological conservator, who has been given the task of restoring Henry's automaton to take her mind of the sudden death of her longterm lover.

The writing styles of our two narrators are distinct but they are linked early on by shared personal tragedy and loss of love.  Embroidered through the narrative is the unfolding ecological tragedy of the BP oil disaster in the Gulf of Mexico (hence the choice of 2010) and the mid-Victorian parallel of the onset of the industrial revolution and its effect on both landscape and craftsmanship.  And to round it all off, a highly amusing twist (which Carey has been dropping hints about all along) concerning the wunderkind Carl.

Not one word wasted - and again, as with le Carre's A Most Wanted Man, a perfectly crafted ending, sufficient unto the purpose and no flummery.

For my reviews of other Carey novels, which predate this blog, see my media and culture blog.
Posted by rogerwood at 15:19