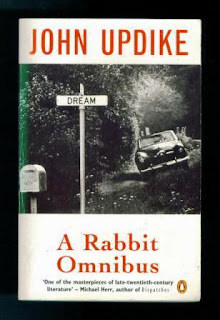 Rabbit Redux...  Ten years on from Rabbit, Run, Rabbit Angstrom's life falls apart again.  This time it's Janice who leaves him, seduced by the slick charms of Greek car salesman Charlie Stavros.  Rabbit finds himself footloose and fancy-free in the 1969 summer of sex, moon landings and Black Power.  Before long he and thirteen year-old Nelson are sharing their suburban home with wealthy dropout Jill and her dealer Skeeter, the Black Christ.  Rabbit's mother has Parkinson's and wall-eyed Peggy has also been abandoned by her spouse.  Enter Mim, Rabbit's sister, the wannabe movie star turned escort, doing what she does best to restore balance to the world of Brewer.

Brilliantly plotted, exquisitely written.  Updike perfectly captures the era when America began to lose faith with itself.
Posted by rogerwood at 15:52