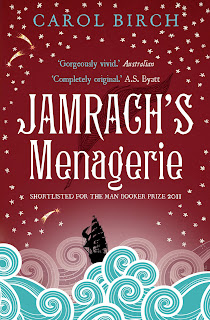 One of the sensational shortlist for the 2011 Booker Prize, which rather predictably went to Julian Barnes, this is historical fiction derived from two real events - the rescue of a little Wapping boy from the jaws of an escaped Bengal tiger by wild animal trader Charles Jamrach and the sinking of the whaler Essex.  To begin with, we are lulled into thinking it is a children's story in the manner of Leon Garfield, but it goes much, much darker as we read on.

The early chapters in and around mid-Victorian London's notorious Ratcliffe Highway are pure Garfield and entirely captivating.  Our hero, eight-year-old Jaffy Brown, is rescued from the tiger and given a job at Jamrach's.  There he meets Tim, and through Tim, Ishbel.  Soon Jaffy and Tim and Jamrach's supplier Dan Rymer are sent round the world on a rich client's whim in search of a living dragon.  They travel aboard the whaler Lysander.  Here, I have to admit, I got bored and was in danger of abandoning the read.  So much time is spent establishing the multitudinous crew members that for me it was a struggle to keep going - but Birch has to risk this because we need to feel for these people later.  I am so glad I kept going.

The scenes of whaling are gross but diverting.  They sail to the ends of the earth.  They find their dragon - a Komodo, I assume, though Birch is not explicit - and then everything goes horribly wrong.

The writing has a richness that's almost tactile.  The whole story is told by Jaffy who starts out an undeducated sewer rat of eight and during the course of the novel grows up in the hardest way imaginable.  How you 'voice' that radical a character development is critical - and Birch succeeds brilliantly.  Tremendous stuff, highly recommended.  I checked out Birch's other novels and have added her Scapegallows (2008) to my must-have list.