In the Thirties - Edward Upward 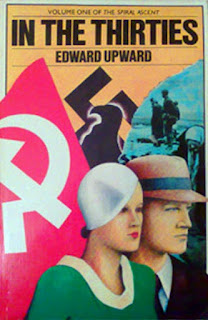 Edward Upward, who died in 2009 at the mighty age of 105, was a schoolfriend/collaborator of Isherwood whose communist beliefs, unashamedly embedded in his art, would always bar him from the mainstream literary establishment.

The Spiral Ascent, a trilogy of which In the Thirties is the first volume, was a work of his maturity, appearing from 1962 to 1977.  Effectively it is his second novel.  More importantly, it is the ultimate rara avis of English literature, an overtly political novel about the groundroots of political activism.  It is a thinly-fictionalised account of Upward's increasing involvement with the Communist Party of Great Britain whilst working as a master in a state school with pretensions (unnamed in the novel but in real life Alleyn's in Dulwich).

Upward's previous novel, Journey to the Border (1938), was in the Isherwood/Auden/Spender modernist poetic tradition and this is echoed in the first chapter of In the Thirties, which concerns a 1920s seaside holiday taken by the recently-graduated aspirant poet Alan Sebrill.  It contains the following, very I/A/S passage:

"...the spume like fine lace curtains undulating in a black wind, or like the shredded fat hanging down over a bullock's heart as seen in a butcher's shop.  Then the miniature waves detaching themselves from the spent breaker ... flopped on the sand with pause and dip like the rolling of a metal ellipse, or like the movement of the genitals of a naked male runner..."

Oo... The remaining thirteen chapters are nothing at all like this and the other characters of Chapter 1 do not reappear.  It is as if Chapter 1 was written in the 1930s and taken up again by the older, wiser author thirty years later.

The only criticism I can make of In the Thirties as a whole is that it might have been more effective in the first person.  Nothing happens that Alan is not witness to and the only thoughts we share are his.  It therefore feels a little stilted for Upward not to go the whole hog.  Perhaps he was reluctant to let the personal eclipse the political in any way.  That would be the CP attitude, I suppose.

The second volume of The Spiral Ascent is The Rotten Elements, a phrase "sometimes used in the party to refer to members who deviated seriously from the correct party line."  It deals with the CP in the post-war late 40s.  It is very hard to come by in printed form.
Posted by rogerwood at 12:19