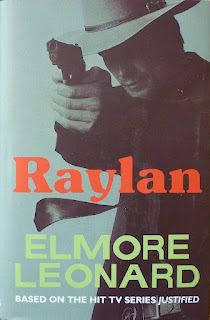 This is, by my calculation, Elmore Leonard's forty-fifth novel.  It is by no means Leonard's best work (my personal faves are Glitz and Cat Chaser) but Leonard is 86 years old now and is still the master of his game.  Nobody does it like Elmore does.

Raylan is, of course, Raylan Givens, protagonist of the wickedly-good TV series Justified, now coming up to its fourth season.  Raylan existed in fiction long before hitting the screen (Pronto and Riding the Rap in 1993 and 1995 respectively, plus the 2001 short story Fire in the Hole) but Raylan is a sort of novelisation of Justified season two (2011).

I say 'sort of' because it is the same yet different.  What we have here is really three novellas interwoven and, it has to be said, not very well.  The first story is about organ theft and would work well on TV.  The third story features the American fascination with high-stakes gambling and, if you're not American and don't share that obsession, pretty damn feeble, particularly since Raylan and Boyd are only peripherally involved at the denouement - literally spectators.  It is the second story, Harlan County resistance to opencast mining, that mirrors the second season of Justified.  But there are major differences: instead of the matriarch-dominated Bennett tribe, the mountain-owning crime clan are the patriarchal Crowes.  The sons have the same names - Dicky and Coover - but are nothing like the screen versions and, indeed, are only there to get shot.  The superficially acceptable face of big mining, Carol Conlan, is much more complicated in the book than she was on TV and is also despatched in a way I certainly don't recall from the gogglebox.

A curiosity, then, within the Leonard canon, but a decent read and another object lesson in style.
Posted by rogerwood at 13:04