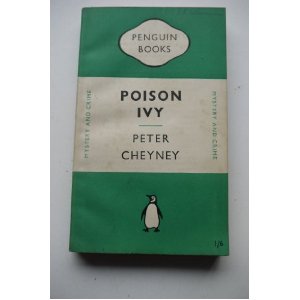 In Cheyney's second novel (1937), G-man Lemmy Caution is embroiled in a Great Train Robbery heist centred upon the eponymous true-noir femme fatale, nightclub torch singer Carlotta.  The first-person, present-tense narration is reasonably convincing and often compelling, with plenty of twists and turns along the way.  The final twist was a stunner I didn't see coming.

I know that some noir fans sneer at Cheyney but they have to remember that it was through Cheyney, who was already an extremely well-known crime writer for the colourful press when he began writing novels, that the English public discovered the likes of Hammett and Chandler.  Cheyney sold millions, the others didn't - but they sold a lot more on this side of the Atlantic because Cheyney popularised the hardboiled style.  And not only in print - the earliest dramas on the British Forces Network were specially commissioned 15-minute playlets featuring the series characters Cheyney had developed by 1940 - Lemmy Caution, of course, and the British sleuths Slim Callaghan and Alonzo Mactavish.  (If you think Alonzo has an unlikely moniker, Slim's oppo is Windemere Nikolls.)

It's interesting how, in the early novels, Cheyney feels he has to Anglicise Caution - the denouement of Poison Ivy takes place in England as, apparently, did its precursor, This Man is Dangerous - and Americanise Callaghan (actually, Nikolls in Canadian).  Was he hoping for big US sales, which didn't come, or a Hollywood movie?  We shall probably never know - Cheyney died young and the only biography is by a country mile the worst book I ever read - and he has yet to be discovered by cultural historians, other than me.
Posted by rogerwood at 15:53