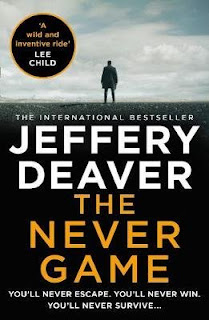 Jeffery Deaver broke through in the UK around the time I took a twenty-year break from contemporary American crime fiction, albeit I did catch his breakthrough book The Bone Collector.  Now I picked up this, from 2019, the first in a trilogy about reward hunter Colter Shaw.  Shaw was brought up a survivalist.  His father Ash was a brilliant academic who suddenly headed for the California wilderness and sealed himself and his family inside a compound.  The adult Colter now uses his wilderness skills to track down missing people, sometimes killers.  He does it for the reward money although sometimes he doesn't bother to collect.  He travels all over the US.  His actual home is in Florida but he has a luxury RV and will go anywhere the trail leads him.

In this case a young woman has gone missing - but not the young woman Shaw is trying to rescue in the teaser (which shows straight off how clever a storyteller Deaver is).  The case leads him into the dark heart of the Silicon Valley and its hardcore gaming community.  Shaw has never used his computer for anything other than work so we learn about gaming with him.  Meanwhile Shaw plays his own complex mental game, the titular Never Game, which was Ash Shaw's method of instilling survival skills into his three children.  Never do this, never do that ... etc.

Also slowly unravelling in the background is the mystery of Ash Shaw's death fifteen years ago and the disappearance soon after of his eldest son Russell - arcs which are clearly going to complete over the trilogy.

I was impressed.  Deaver has an easy style, informal yet always controlled.  His story skills are superb and he has clearly done his research.  This we can tell because he names his sources at the end - citing one of my favourite books, The Difference Engine by William Gibson and Bruce Sterling (reviewed on this blog something like five years ago).  His supporting characters are multi-faceted and therefore able to drive the narrative when necessary and hold our interest at other times.