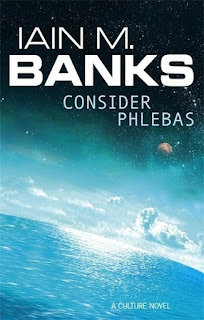 Consider Phlebas is the first of Banks's 'Culture' sci fi novels.  The Culture is at war with the tripedal Iridans and our protagonist, Bora Horza Gobuchul is a humanoid Changer working with the Iridans.  Indeed, the novel begins with the Iridans rescuing Horza from a fate worse than death - only to plunge him into another when their ship comes under attack and Horza is picked up by a bunch of space pirates and taken aboard their spaceship Clear Air Turbulence (CAT).  Their leader Kraiklyn is heading for the artificial world of Vavach and the ultimate high stakes game of 'Damage'.  The stakes couldn't be higher, because the Culture has announced it is going to destroy Vavach at midnight.

Horza escapes by assuming Ktaiklyn's identity and taking over command of the CAT.  His real identity is revealed by another escapee from Vavach, the Special Circumstances Agent Perosteck Balveda.  Horza leads the group to Schar's World, where he used to live with a group of other Changers and where a Culture Mind is said to be hidden.

Consider Phlebas is pure space opera.  Like all space opera, it is drawn with a relatively broad brush.  Entire civilisations are either wholly bad or wholly good.  Banks tinkers slightly with the form, blurring friendships and loyalties.  The imaginative stakes are very high.  Banks clearly loves describing the science behind his ultra-high tech conceptions.  To balance this, the prose and dialogue is deliberately prosaic.  Things move along nicely and there is refreshing humour when required.  In the end, things more or less work out.  But I still have no idea what the title refers to.

I'm new to the space opera form, though I have several other examples stacked on my Kindle, ready to try.  I enjoyed Phlebas and will certainly explore further.