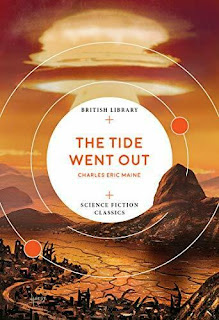 I have written before on this blog about the twisted road that led me to the speculative fiction of Charles Eric Maine (David McIlwain, 1921-81).  His writing career really only covered the Fifties and Sixties but he was at the top of his game from the outset and for a time was up there with John Wyndham, John Christopher and the young J G Ballard.  Like them, he tended towards the eco-disaster, which is what The Tide Went Out is.

It is 1958 (Maine is always contemporaneous) and US A-Bomb tests have gone too far.  A sub-ocean blast has cracked the Earth's crust and all the water is seeping away.  Philip Wade is seconded from the science weekly he edits and placed at the secret governmental hub in London's Kingsway (I suspect at the former General Electric building where the BBC started out) to produce sanitised news for the Press.  Officially the world's combined efforts and trying to pump water back from the core.  In reality, there is nothing they can do and ninety percent or more of the population is going to die very soon.  Wade's family, and the families of other personnel chosen to survive, have been taken to polar camps where there is still plenty of ice.

Maine paints a vivid portrait of London at the time as society slowly begins to crumble.  Barricades go up and the army comes in to protect the elite from the masses, and soon the soldiers go rogue too, but with all the weaponry they can want.

Maine explores the key questions we are currently asking about the COVID pandemic.  Why have we so crazily damaged the only world we have?  Who chooses the elite?  Can we trust anything the government tells us?

Another well-selected reprint from the British Library.