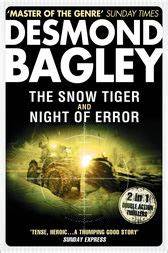 Another two-for-one by Bagley.  The Snow Tiger, from 1975, is a disaster thriller of the type so popular at the time.  Ian Ballard returns to the mining town in New Zealand which he left as a child.  Back then he was the only child of a schoolteacher widowed in the war.  He returns as the grandson of the patriarch of the family mining firm to take charge of the mine on his mother's land which has just struck gold.  He instantly runs up against the Peterson family, who effectively drove him out of town twenty-five years earlier when Ian was wrongly blamed for the accidental death of one of the Peterson twins.  Crazy Charlie, the surviving twin, is still after Ian's blood, which is awkward, given that Ian has fallen for Liz Peterson.

Then the avalanche happens.  The town is destroyed.  Dozens of people die. including the eldest Peterson brother.  A Committee of Inquiry is set up to find out who, if anyone, is to blame for the disaster.  Local opinion is divided.  Most blame Ian and the mine.  A handful blame the Petersons, who own the land adjacent.  Luckily for Ian, the world expert on avalanches is his friend Mike McGill, who warned the town of the danger before it happened.

Bagley uses flashbacks sparked by evidence given at the inquiry to tell the story.  In anyone else's hands this could have been a disaster in itself, but Bagley is a master who can even make the molecular structure of snow on the ground exciting.  The flaw in the book, however, is that our protagonist Ian Ballard isn't really the driving force - indeed, he is in hospital when the denouement happens.  The driver of the story is actually McGill, a far more interesting character anyway.  Apart from that, The Snow Tiger is a cracker.