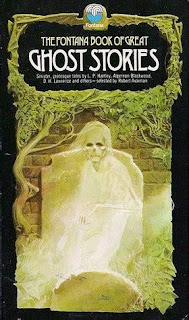 Inevitably in a collection like this, there are going to be old friends.  For me, these included Sheridan Le Fanu's 'Squire Toby's Will' and William Hope Hodgson's 'The Voice in the Night'.  A personal favourite, Robert Aickman's 'The Trains' was also here.  I had read D H Lawrence's 'The Rocking-Horse Winner' and Algernon Blackwood's 'The Wendigo', both so long ago that I had no real memory of them.  Both were better than expected, true classics of the genre, though neither was about ghosts.  The revelation among the others was, for me, Walter de la Mare's 'Seaton's Aunt'.  De la Mare has cropped up a lot in my research recently but indirectly, and I had not realised how effective his creepy fiction can be.  'Seaton's Aunt', again not a ghost story, reminded me strongly of Kipling at his best.