Through a Glass Darkly - Nigel Jones 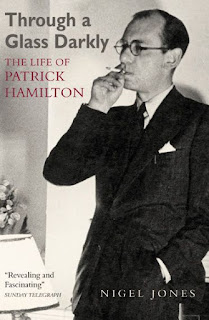 Through a Glass Darkly is the life of Patrick Hamilton.  Patrick Hamilton was a hugely successful author from the get-go, achieving bestseller status while still in his twenties.  He was even more successful as a playwright.  His stage thrillers Rope and Gaslight are still staples of commercial theatre around the world and both made famous movies.

But for all his success Hamilton's life was essentially tragic.  He was horribly injured in a road accident in January 1932 shortly after a controversial broadcast of Rope on the BBC.  He suffered extensive injuries and had to undergo early plastic surgery to repair the damage to his face.  He was 27 years old and was never entirely free of pain thereafter.  He drank to numb the pain - or perhaps he inherited the trait from his truly repellent father; in any event he was soon an alcoholic and drink finally did for him thirty years later.  He married twice but had sexual hang ups, including bondage, which led him to use prostitutes.  Yet he still turned out successful novels almost to the end of his life.  The plays alone would have been enough to sustain him, had it not been for his expensive distractions.

Nigel Jones is a skilled biographer of literary figures - his biography of Rupert Brooke was reviewed on this blog about six months ago.  Of the two, I actually prefer this.  Hamilton's sister-in-law gave him access to material never seen before, and Jones's descriptions and analyses of the books and plays add to the enjoyment.  I enjoyed Hangover Square when I was 19 and now I want to read it again.
Posted by rogerwood at 15:32