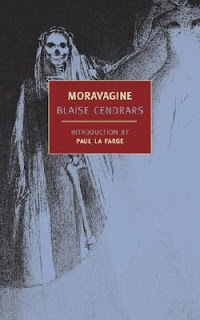 I found out about Moravagine from Jacques Chessex's Vampire of Rompraz (reviewed below) which was a take on Cendrars' original. The Cendrars certainly is original. I know of nothing quite like it. It is, in a sense, a psychological picaresque in which our narrator ("Dr Science") has devoted his life to studying "Moravagine" a nobly-born serial killer of pubescent girls, gross comedian and adventurer. Clearly neither of these men are really encumbered with these names, nor are we told who they really are. Cendrars is himself a fiction, who himself appears in his fiction. One thing both Rompraz and Moravagine have in common is the scene in which Cendrars of the French Foreign Legion loses his arm in World War I. That might well be the only real event in either, but both writers adopt a terse, journalistic style, skimming through loads of circumstantial detail which would otherwise slow down their narrative. They both profess to explain their titular freaks of nature and never get anywhere near so doing. Moravagine is the more imaginative novel, Ropraz the more convincing illusion. The Vampire is more frightening than the child killer because we never really see the killer at work whereas we are shown the gruesome handiwork of the Vampire.

Moravagine is relentlessly offbeat, wacky to the point of derangement, yet it is compelling, occasionally funny, and always fascinating.
Posted by rogerwood at 15:35