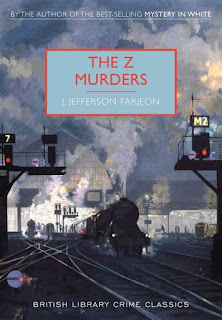 Another of the British Library reprints of Golden Age Crime Classics, overseen by Martin Edwards.  I had never heard of Farjeon but apparently his Mystery in White was the first bestseller of the BL/CC series. I can see why.  The plot here is ingenious, the style period but not off-puttingly so.  And the characters are attractive - even the killer, in his spectacularly hideous way.  There were more than enough twists and turns to keep me fuddled and the final pay-off was perfectly satisfactory.
The hero of The Z Murders is Richard Temperley, who has been bothered by the snoring of a boorish man on the overnight train from Scotland.  Within a few minutes the man has been shot dead and Temperley has met the blonde bombshell who is the prime suspect.  The pace is one of the key ingredients.  The entire adventure takes barely a day and a half, by which time the action (and the main characters) have travelled from London to Bristol, then to Boston in Lincolnshire and finally to Whitchurch, which is apparently in Shropshire.  All modes of travel available in 1932 are used - train, motor car, and plane - which all adds to the fun.
It is extremely reminiscent of The Thirty-Nine Steps but much wittier.
Posted by rogerwood at 15:56