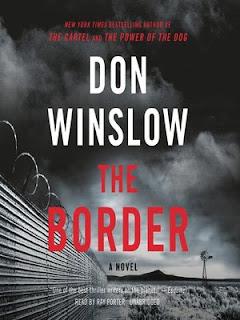 Winslow - back on top form. Brilliant.

The Border concludes the Cartel trilogy and brings it bang up to date. Art Keller emerges from the Guatemalan jungle to take over as head of the DEA, having realised that the only way to tackle America's drug problem is to take out the big money men. That doesn't just mean the Cartel bosses, because Keller now knows there are people above them on the US end of the chain. For the Cartels drugs mean money and power. For the financiers power can be bought by money. And now they plan to buy the ultimate power.

Meanwhile, the fact that Keller has finally taken out Adan Barrera, head of the Sinaloan Cartel and effective boss of bosses, means that the second tier go to war to determine a successor. The lack of order means there are vacuums for figures from the past to return to: men like Rafael Caro, who tortured and murdered Keller's partner thirty years ago, and Eddie Ruiz who was there when Keller took out Adan.

It is a big, BIG story, and rightly so. In so many ways it is the story of our time, the fifty year war on drugs which America has not and will never win. How close Winslow's fiction comes to reality will be open to debate. What is inarguable, a stone fact, is that nobody does this story better than Don Winslow. Does anybody else even dare to try? Each of the three novels - The Power of the Dog, The Cartel, and now The Border - is a major achievement. The three together are a landmark.