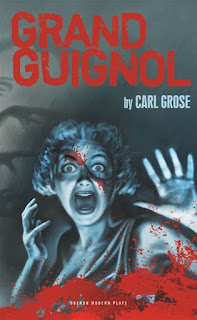 Grand Guignol  is a play. Not a Grand Guignol play but a play about Grand Guignol, specifically the creation of the form in the Parisian theatre of that name around 1900. It starts with a performance of such a play which causes the celebrated physiologist Alfred Binet, the inventor of intelligence testing, to intervene. He simply cannot contain himself and leaps up onstage, breaking the illusion. He gets introduced to the Prince of Terror, Andre de Lorde, otherwise a shy, unassuming librarian and they start to collaborate. Ultimately they conceive the most outrageous of classic Grand Guignol (certainly in England), Crime in a Madhouse.

The performance switches between actual performance and the actors who are doing the performance. Everything we need to know about Grand Guignol in order to follow the action is provided. It is more or less accurate - Grose in his acknowledgements cites the best known authorities on the form, Mel Gordon, Richard Hand and Michael Wilson. There is what I felt was an unnecessary subplot and one rather clumsy in-joke. Other than that, the play is great fun and I would love to see it live. 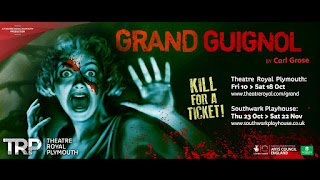 Grand Guignol was first performed in The Drum at the Theatre Royal Plymouth on October 29 2009.