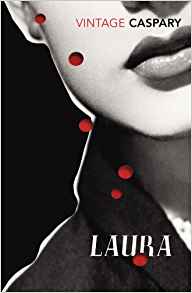 Laura was Caspary's break into the big time. It came out in 1943, having previously been serialised in a magazine, became a Otto Preminger movie in 1944 and a stage play the year after. It is a hard-boiled crime of passion novel with all the qualities of the best literary fiction.

Waldo Lydecker is a New York writer of literary fiction. He is fat, snobbish and affected, with a silly beard and an ebony cane. He is our first story-teller, for Caspary has emulated the Moonstone device of multiple first-person narration. Lydecker is besotted with Laura, as is every man she ever met. Lydecker was seeking to introduce her to art and society, so when she is found dead in her apartment, shot in the bewitching face, Lydecker is the second person Detective Mark McPherson calls on, after Laura's fiance, Shelby Carpenter. Laura and Shelby were due to be married the next week. She had planned a final solo holiday but before she left was due to dine with Lydecker.

The plot is astonishing. My jaw genuinely dropped at the big twist. Caspary drip-feeds the clues like a research scientist breeding bacteria. Everything you need to know is there, none of it apparent without hindsight. The novel is short, exquisitely so, but every word is loaded with meaning. And the style, like the cover art on this Vintage edition, is superb. The following is from Detective McPherson, the fish out of water in the refined circle inhabited by Lydecker, Laura and Carpenter:


Even professionally I've never been inside a night club with leopard-skin covers on the chairs. When these people want to insult one another, they say darling, and when they get affectionate they throw around words that a Jefferson Market bailiff wouldn't use to a pimp. [...] It takes a college education to teach a man that he can put on paper what he used to write on a fence.